Sorry, but this project has been shelved.

After nearly eight months of waiting, the architect said, "Lets get this started, and we will see as we go along...".

This is not an approach we are comfortable with - especially when we do not have the luxury of time or money for a laid back, poorly planned "as we go along" approach.

I am wondering whether to close this blog or to turn it into something else...
Posted by Dinakarr at 7:21 PM 1 comment: 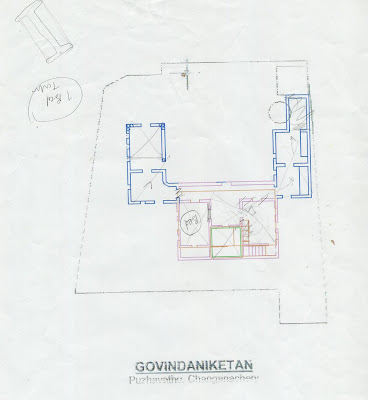 A draft print-out from Achan's self-learnt AutoCAD. This was used for the discussion with GS on 19 May 2007.

Using his pencil, GS had put forth some preliminary suggestions -

Posted by Dinakarr at 2:23 AM No comments:

Today was my first visit to the office of Habitat Technology Group at Poojapura. And what a lovely workplace! From the main road it looks like a small building built in the traditional style - sloping tile-roof, a recessed entrance area strewn with footwear. It is only when your walk in bare feet, towards the Reception that you realise how large the office really is- its three floors; a skylight leading down to a green patch within the building; each nook and corner set in earthly tones.
At 11:00 AM, Achan, DC & I had a brief meeting with Mr. Shankar where he outlined his (preliminary) ideas for rennovating Govindaniketan. He wanted to break down a few walls to create more open, airy spaces inside the house; to add a second bedroom with attached bath, to create a "poomukham" and an open sitout at the entrance, a larget kitchen+dining, etc... It was great to see him so enthusiastic about preserving the old ambience of the house as much as possible.

At the same time, when we asked him about the expenses and the timeframe, he said that we would know for sure only after we removed the tiles and some the wooden beams. He wants to start the work after the monsoons / and expects the work to finish by Jan-Feb 2008.

This was rather unexpected. We had been under the impression that a visit could take place only after Rajesh prepared the detailed sketches. But on 30 April, after taking measurements for the sketches, Rajesh had dissapeared. Then came the abrupt announcement that he was getting married.

Worried that the whole project would be indefinitely delayed, Achan had made a telephone call today to Mr. Shankar. As luck would have it, he was at Chry itself! Since he had some spare time at hand he asked if he could visit Gnktn at short notice. Thankfully Manoj was at home and he quickly took Mr. Shankar around the house.

Manoj later told Achan that Mr.Shankar suggested some broad changes to preserve the ambience of the old house, while at the same time, making it more open and airy -- removing a portion of the kitchen, making a sit-out near the entrance, etc.

Great! A lot of uncertainty has just got blown away...

.
A perspective drawing of the house from the north-western corner, next to the main entrance.

Quite crude.... but one has to make a start somewhere! :) 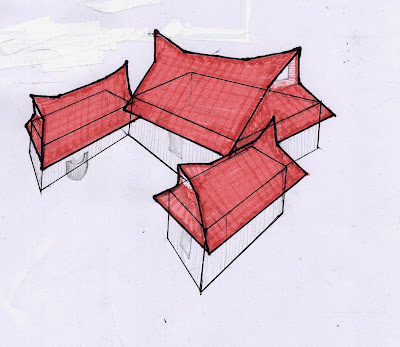 And a view of the area from Wikimapia

.
There is so much to learn about traditional houses in Kerala!

The only house I could claim to know - at least to some extent - was Lakathekkethil, my maternal grandfather's house at Thrikodithanam, Changanassery. We visited it almost every year during school vacations, and, in our minds, it was the stuff that childhood fantasies were made of -- a sprawling house set in a large estate (a Parambu) bordering paddy fields, forest groves (Kaavu) and a little stream full of little fishes called Maanattu-kanni (eyes-to-the-sky).


The house itself stood at an elevation to the road, so the gradient served as the compound-wall (Kaiyyalla). Numerous trees dotted the estate - coconut, mango, cocoa, mangosteen, guawa, bael, jambekka (bell fruit); coffee bushes stood guard to an ancestral shrine, and a little pond (kulam) on the eastern corner was a favourite venue for endless hours of wild splashing, fishing and turtle hunting.

One hears a lot about Naalukettu- four-block houses enclosing a courtyard. But I have never seen one in Changanassery - the Eastern block (Kizakkini) was always missing. In its place stood an extra- large mittam or courtyard. The layout of Lakathekkethil, and that of the family house, Elamkoottil in Tiruvalla , is in the following pattern: 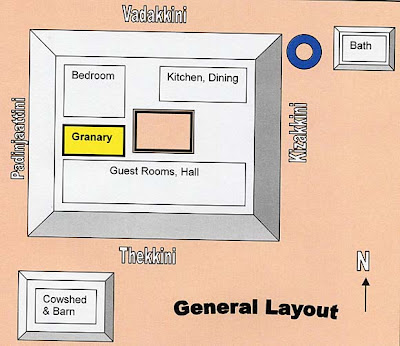 * The house is on a raised platform, with low walls, sloping roofs and overhanging eaves. A recessed verandah (Thinna) is also a common corridor to the main rooms;
* The focus of the house is the Granary - the Nelavara, an airtight structure made of solid wood sits on a raised platform with its main door facing east. Below the Nelavara is the Patthayam - a storage space for large cooking utensils and coconuts;
* A large courtyard or Mittam at the front of the house serves not only as a common space for family functions but is also used for sun-drying spices, coconut copra, clothes, grains and fruit;
* The kitchen is always on the northern or northeastern side; next to it is a well (Kenaru) - the main source of potable water for the household;
* Family shrines and sacred groves (Kaavu) are located to the East of the house;
* Guests and visitors are received in the southern rooms. The main hall here is called the Chavadi;
* Toilets were rarely attached to the main building. Residents either relieved themselves in the open (Velikku-eranguga - literally "going outdoors") or had temporary sheds made in the Parambu for the purpose. Attached toilets with running water came in the early '60's.

Did I miss something here?
.
Posted by Dinakarr at 5:14 PM No comments:

There are very few architects in Kerala who are able & willing to work on old buildings. Mr. G. Shankar is one of them. But as the protégé of the great Mr. Laurie Baker, and as the founder & Chief Architect of Habitat Technology Group, he is a very, very busy man.

Acchan & Amma finally managed to meet Mr. Shankar on 11th April 2007. As discussed over the telephone, they had gone to his office in the morning accompanied by Rajesh from Changanasseri, to chalk a plan of action.

While waiting for Mr. Shankar to return from another meeting, Rajesh had expressed his skepticism about retaining the old wooden structure -“It is better to dismantle the old stuff…I could help you find some buyers..”.

Thankfully, Mr. Shankar took an altogether different view. His logic was simple, “You have come to me because you are interested in preserving the old house, its memories and sentiments... First of all I would like Rajesh to make a precise sketch after taking measurements. I would then visit the site before the next course of action”.

What about the Nelavara – the old, airtight, wooden granary at the center of the house? The storage space below it was getting infested with rats…Would it have to be dismantled?

“Oh, that won’t be a problem…we could perhaps replace the mud floor with something less vulnerable to gnawing rats. As for the Nelavara, we could make sliding windows into it and make it an airy space. But let me see it first.”
Posted by Dinakarr at 5:36 AM No comments: